In general, beans will give a profitable response to manganese in the parts of the field where manganese deficiency is obvious. There is no benefit to applying manganese to beans that are not showing deficiency symptoms.

In good growing conditions, the affected leaves should green up in 4–5 days. Chelated manganese products are equally effective if applying the same amount of manganese, but the cost is significantly higher than manganese sulphate. Low rates of chelated manganese are not effective in correcting a deficiency.

Manganese is less available at high soil pH, so it is important not to add more lime than is needed to correct soil acidity. The oxidized form of Mn is less available than the reduced form, which is why sometimes symptoms appear in areas with greater aeration and less compaction.

OMAFRA-accredited soil tests are available for manganese. Manganese is reported as an index to account for both the amount of nutrient extracted from the soil and the soil pH. Soil pH has a huge impact on the amount of manganese that is available to plants. With manganese, plant analysis, visual symptoms and the soil test are all useful. 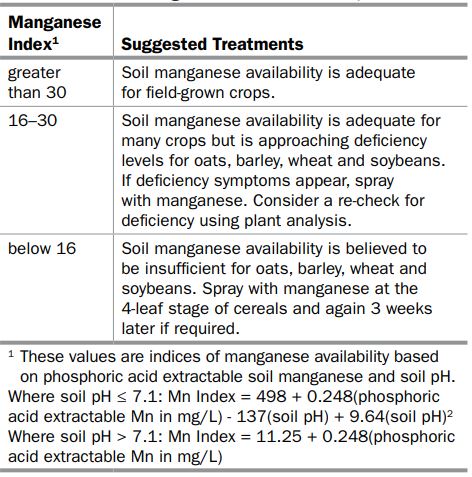